Best thing on blades: The 2020 Outhouse Races are here 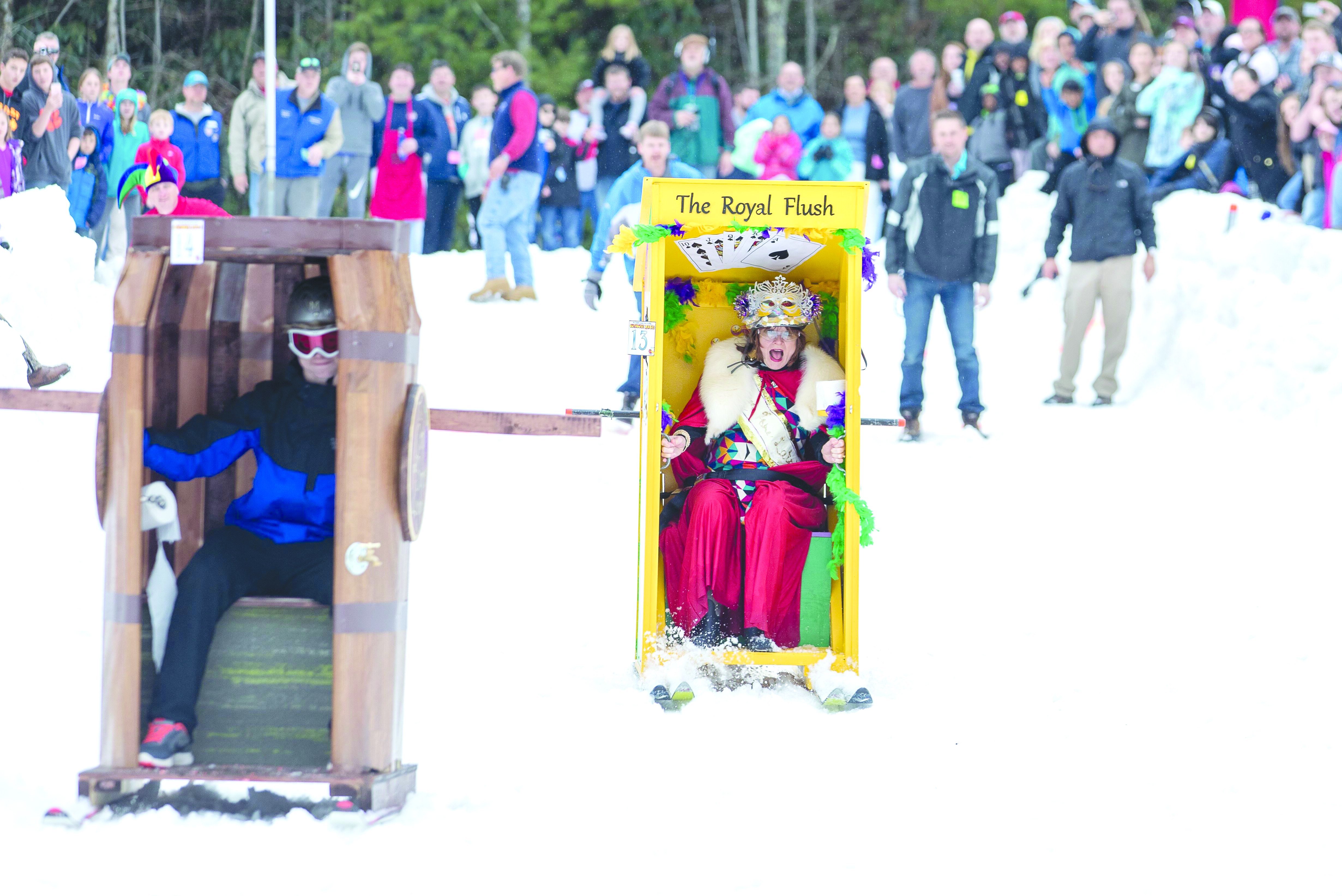 Last week’s snow has turned to rain, but that isn’t stopping the winter fun at Sapphire Valley Resort - at 3 p.m. on Feb. 15, the 14th Annual Outraces Races at the resort will have plenty of snow.
According to Melissa Webb, account manager for Pineapple Public Relations and a spokesperson for Sapphire Valley Resort, the Outhouse Races are one of the winter’s wackiest events in the country.
“Every winter toward the end of the ski season, Sapphire Valley Resort hosts this annual event, where outhouses on skis are raced down the slopes in front of a crowd of several hundred people,” Webb said via a press release.
The average observer may ask, “What is an outhouse race?”
“Imagine watching someone dressed in a crazy outfit climb into a decorated outhouse built on skis, sit on a toilet seat and fly down the slopes—all while attempting to stay upright without crashing into the banks. That’s a taste of Sapphire Valley’s annual Outhouse Races,” Webb said.
The rules are simple: register in advance, outhouses must be five feet tall and come equipped with some key identifying features.
“Beyond those requirements, outhouses are encouraged to be creatively decorated,” Webb said. “And the more outlandish the participant’s costume, the better.”
Past participants’ themes included: “Who Cut the Cheese,” “Redneck Wishing Well” and a clown dressed up in an outhouse named “Party Poopers.”
Homemade outhouses can be made of wood, cardboard, plastic or any other homemade items. There are three people to a team and outhouses are secured on a set of skis, which can be provided to teams by the Sapphire Valley Ski Area. These skis are pushed by two team members, while one team member ‘sits’ inside.
Outhouses are equipped with a seat with at least one hole, and a roll of toilet paper, or alternative wiping source.
The race course is a two-lane track on packed snow, or on ice, with two teams racing each other head to head in drag-race-style heats over a length of approximately 120 feet with the first 30 feet being propelled by the pushers and the last 90 feet under its own gravitational power.
Admission is free and open to the public, Webb said.
“Not only is the event free, but the destination is a great budget-friendly destination that lacks the mass crowds that other ski resorts/winter destinations are filled with this time of year- a perfect winter escape for outdoor lovers and families,” she said.
The afternoon begins with a parade to view the different outhouses with the races beginning at 3 p.m., Webb said.
All proceeds of the event benefit local charities.
Glenville resident Jose Luis Feria Aparicio captured first place for the second straight year in the 2019 outhouse race, guiding a St. Jude Catholic Church Knights of Columbus entry to victory. The cross-topped entry was called Confession Concession and was modeled after a Catholic confessional booth.
Other winners included:
• Most Creative --Connestee Crap Pots’ Yabba Dabba Doo Doo.
• Most Humorous --Lonesome Valley’s Lonesome Loo.
• Best Construction --Mica’s Restaurant and Bar’s Mica’s Mule.