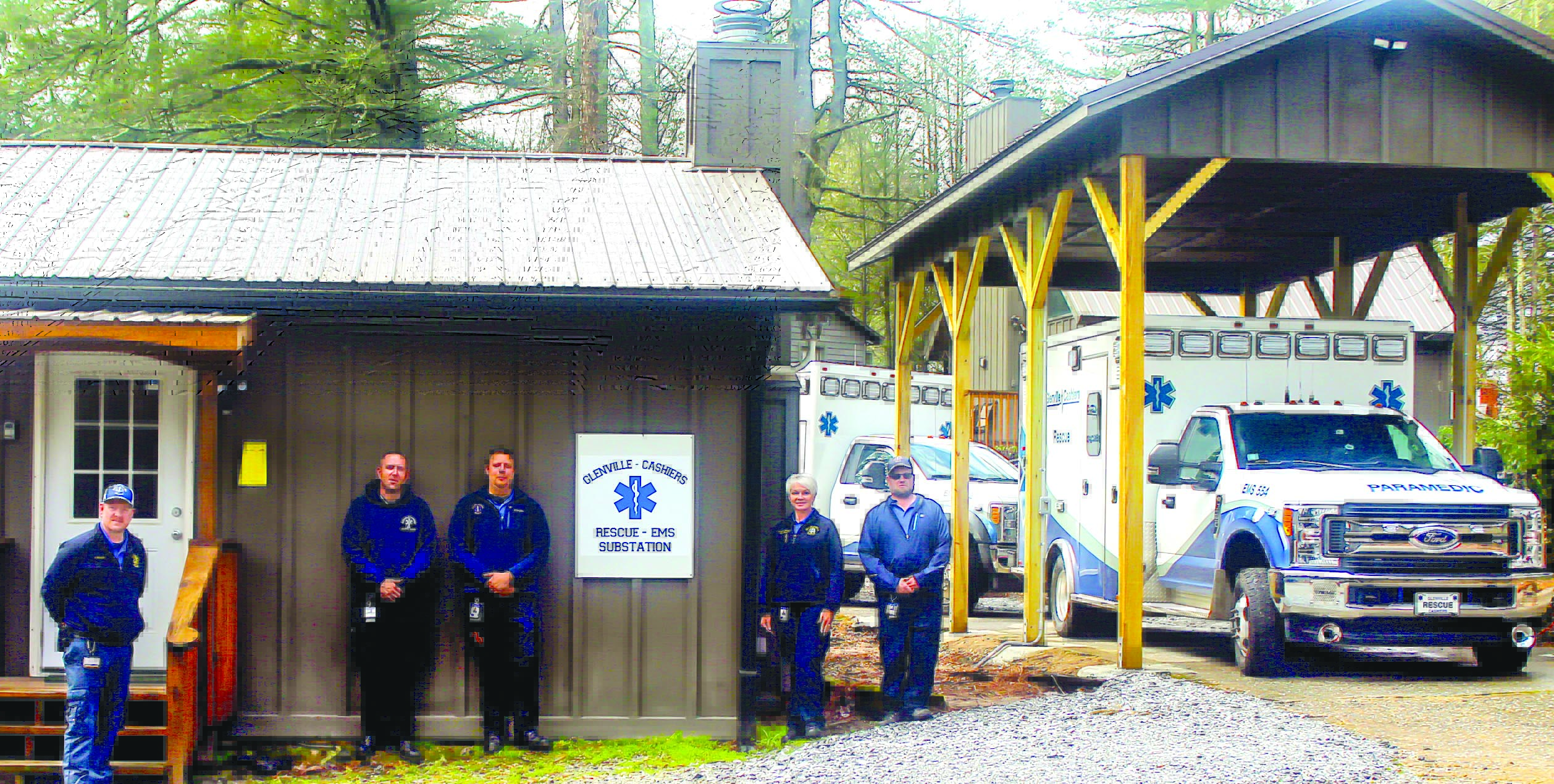 With the construction of its permanent second headquarters on US 64 in Cashiers held up in court, the Glenville-Cashiers Rescue Squad didn’t have time for lawyers to sort through the myriad of pending lawsuits grinding construction to a halt and instead, opened a temporary headquarters across the street.
“It’s all about the people,” said Captain Jeff Stewart. “Since opening this temporary headquarters in Cashiers the rescue squad has since decreased response time to Sapphire and NC 107 South by 30 seconds.”
In an emergency, every second counts, especially when factoring in the nearly 1,000 emergency medical and search and rescue calls the rescue squad handled in 2019. Due to these increasing call-volumes and the uncertainty as to when construction may resume on the GCRS’s permanent location, Jackson County approved funding for a second full-time, two-person ambulance crew.
“With the ever-increasing call volumes and the growing population along Highway 64 and 107 South, the Rescue Squad has looked to construct a second base of operations close to the Crossroads, which would significantly reduce lifesaving emergency response times to many of those in our service area,” said GCRS Director Amanda Owen.
Originally, according to lawsuit documents filed by GCRS against its former Director Brandy Sullivan, the rescue squad contracted Sullivan to retrofit a portion of the squad’s present Norton Road headquarters to accommodate a second, full-time crew. Unfortunately, according to rescue squad documents, it was recently discovered that the proper and necessary construction permits had not been obtained for the construction of the new living quarters, nor had the facility been properly inspected, as required by Jackson County regulations, during construction or upon completion. Subsequent third party inspections indicated significant life-safety issues associated with the project.
“Due to ongoing legal proceedings with our former chairman, the rescue squad has had to delay the construction of the previously announced ‘Station Two’ location on US 64 East,” Owen said. “As set forth in our legal pleadings, the rescue squad is very troubled by the discovery of the significant life-safety issues and lack of required construction permits and inspections for our ambulance-crew living quarters built in 2016, which we have had to stop using.”
Immediately upon learning of the issues associated with the headquarters, the rescue squad board took action to cease usage of this facility and sought out a new off-site headquarters location for its second crew.
“We run two full-time crews,” Stewart said. “One at our main Norton Road headquarters and the second at our new US 64 substation in Cashiers.”
Rescue Squad spokesperson Nat Turner said the GCRS had to make other plans in providing coverage to Southern Jackson County.
“Because of these issues with our living quarters and the need for a closer Crossroads location, the rescue squad is pleased to announce it has established a new temporary ambulance crew quarters location at 61 Brocade Drive, at the entrance to the Country Cottage,” Turner said. “This location on US 64, just east of the Crossroads, now provides a second base of operations for our ambulance and rescue services.”
The GCRS thanked Vision Cashiers and the Gralnick family for assistance in finding and securing this location.