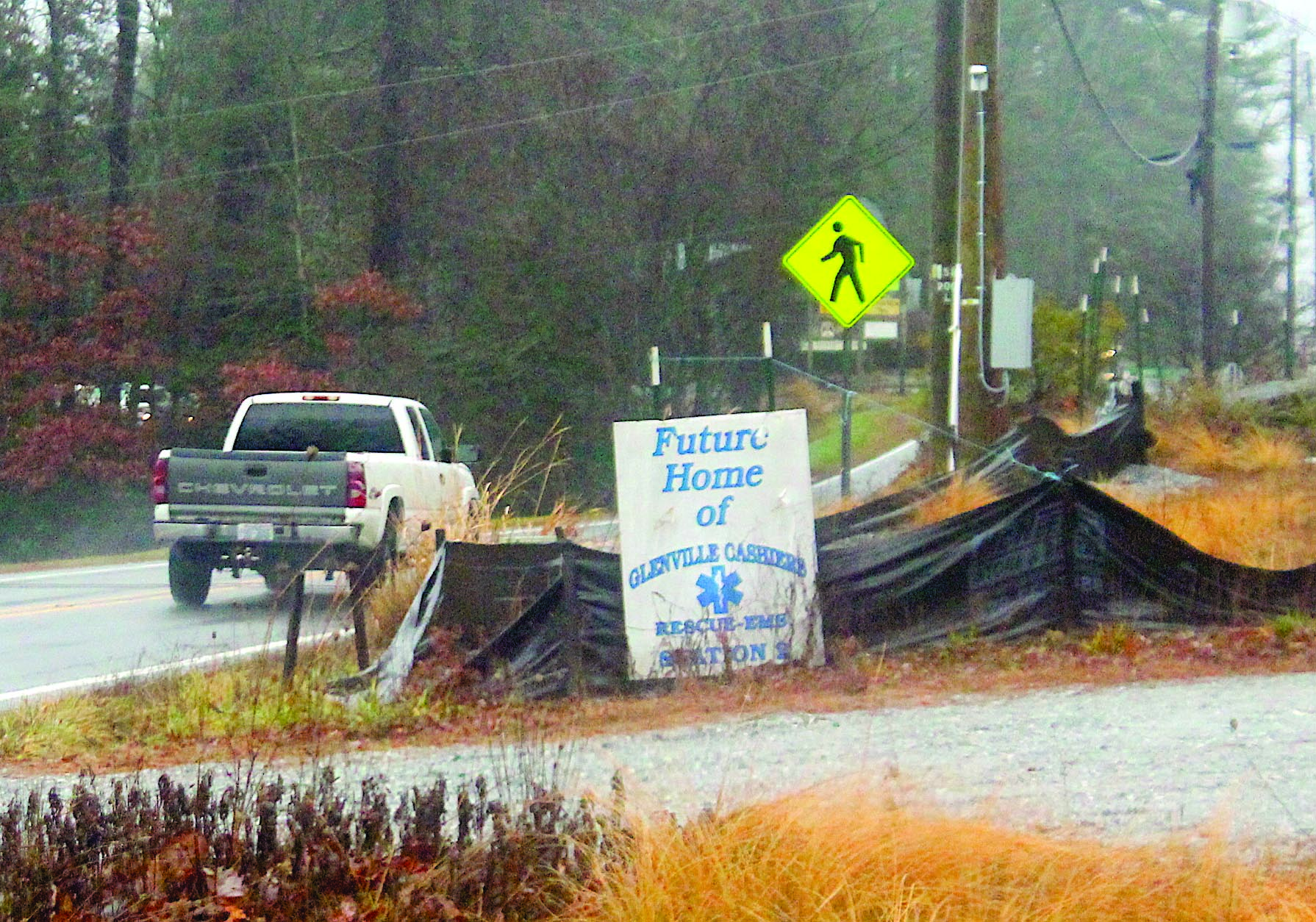 The Glenville-Cashiers Rescue Squad is embroiled in civil litigation with former board chairman Brandy Sullivan and his company over alleged wrongdoings committed by Sullivan, improper use of $152,000 of rescue squad money and breach of contract claims made by Sullivan against the rescue squad.

The contract complaint arose out of the rescue squad withholding the final payment on a contract with Sullivan’s company, Sullivan Custom Homes, to “construct the Glenville-Cashiers Rescue Squad Station #2 located on Highway 64 East,” according to lawsuit documents.

In the lawsuit, Sullivan contends his company was hired to build the Glenville-Cashiers Rescue Squad Station #2, located on US 64 East in Cashiers. On Feb. 1, 2018, Sullivan presented GCRS Chief Carl J. (Jeff) Stewart and board member Sandra Taylor with a contract to sign on behalf of the rescue squad.

The contract, with change orders, was listed at $2.33 million. Lawsuit documents state Sullivan successfully provided labor and materials for the project as long as allowed with invoices totaling $91,553.

Documents state that the rescue squad did not object to Sullivan’s performance and “in fact sought Plaintiff’s continued performance until, for reasons satisfactory to itself, it changed its position.”

On July 25, 2018, according to lawsuit documents, “the Defendant sent the Plaintiff a letter titled ‘Cease and Desist Construction of Glenville-Cashiers Rescue Squad Station #2.”

In the letter, GCRS leadership stated “the rescue squad approved a resolution to cease and desist construction of the station because it had not approved the building plans, nor had it approved the contract.”

Sullivan contends the contract was legal and legitimate, but did as the letter asked, stopping construction and sending invoices to the rescue squad, which it refused to pay.

The lawsuit documents claim that “The Defendant’s failure and refusal to allow the Plaintiff to complete its work and its termination of Plaintiff without payment in full constitute breaches of contract.”

In a separate countersuit filed by GCRS against Sullivan, the rescue squad alleges that Sullivan’s company was never qualified to build the new Station #2 as he was not properly licensed to do it.

To become properly licensed, the Rescue Squad claims Sullivan had improperly and fraudulently “taken, stolen or otherwise wrongfully deprived the Squad of funds,” causing $152,000 of rescue squad money to be wired from the GCRS bank account to an account controlled by Sullivan and/or Sullivan Custom Homes. Documents state the funds were taken in June of 2017. Lawsuit documents also state Sullivan returned the $152,000 to the GCRS bank account after the funds were used to fraudulently verify funds in Sullivan’s business account for obtaining a promissory note.

Lawsuit documents state that one obstacle for Sullivan in securing the work for himself in the first half of 2017 was that he lacked the required contractor’s license for a project of this scale.

An applicant for an unlimited license must show assets that exceed its liabilities by at least $150,000, as reflected in an audited financial statement prepared by a certified public accountant. GCRS claims Sullivan lacked such assets in its lawsuit.

Sullivan denies the accusations, stating they are false and misleading and asking for them to be stricken from the record as denying a simple factual matter: that the Treasurer actively transferred the funds.

The GCRS answered the counterclaim, stating Sullivan attempted to force through a proposed contract benefiting his construction company for completion of the Rescue Squad’s new Station #2 in February 2018. It also alleges the GCRS Board of Directors never approved the purported contract, that Sullivan was paid $61,010 from the Rescue Squad’s account to his own before the purported contract was ever executed and that the two GCRS individuals, Chief Jeff Stewart and board member Sandra Taylor, were not authorized to execute the contract, claiming they were induced to sign the contract under false pretenses.

Sullivan said the GCRS got it wrong.

“On the contract to prepare the site and build the facility, Chief Jeff Stewart and Board Member Sandra Taylor both signed the contract,” Sullivan said.

Stewart and Taylor claim Sullivan misled them and lied in regard to the signing of the contract and its validity.

Stewart said he was misled by Sullivan.

“Brandy Sullivan was the Chairman of our Board and the highest ranking official,” Stewart said. “I was, and still am, the Chief of Operations, where my responsibility is to lead the fine men and women of the Glenville-Cashiers Rescue Squad during emergency events and responses.”

Stewart said he reports to the squad’s board and specifically to its Chairperson, Sullivan.

“I have never been a board member and at no time have I ever had the authority to spend over $1,500, or sign contracts, without board authorization,” Stewart said. “Brandy brought me a contract and implied that it had been approved by the Board and that it had been reviewed and approved by the squad’s lawyer, but as we learned, statements and representations given to me by our chairman turned out to be untruthful.”

Sandra Taylor, at the time a member of the Rescue Squad’s board and a squad volunteer, said the whole situation was unfortunate.

“Certain misrepresentations were made,” Taylor said. “The board was misled, and I look forward to all the facts coming out.”

Sullivan claims the contract was legitimate and that he was advised by attorney Ed Henson to have Taylor and Stewart sign the contracts on behalf of the rescue squad.

Attempts to reach Henson for comment were not successful by press time.

Nat Turner, GCRS Public Information Officer said the two signatures did not make the contract valid though, adding the rescue squad has strict procedures in place that must be followed in regard to the issuance of contracts.

“As with any charitable organization, there are very strict internal control procedures and required processes for the management of the organization, the disbursement of funds, and the approval of contracts, especially multi-million-dollar contracts using County tax-payer and donor money,” Turner said in an e-mail statement. “The Rescue Squad takes very seriously the stewardship of the funds it is entrusted to manage and the performance of the critical EMS and Rescue services we provide to the citizens and visitors of southern Jackson County.”

“Once these issues were discovered, the information was immediately disclosed to Jackson County officials,” he said. “Additionally, an independent accounting firm has been engaged to conduct full financial audits for the 2017 and 2018 fiscal years, which covered the time period in which these issues occurred.”

Since then, according to court documents, other litigation has followed. The last coming on Sept. 25, 2019, a reply by the GCRS to Sullivan’s request for dismissal.

“The rescue squad withheld the final payment on work my company had done on site preparation for the new rescue squad headquarters,” Sullivan said. “We tried to settle this amicably, but things went south, and we wound up filing lawsuits.”

Sullivan worked for the GCRS for more than 20 years and he was saddened that their relationship ended the way it did.

“I rose up through the rescue squad from the rank of captain and the final two years I was Chairman of the Board,” he said. “It got to be too much at the end, and I opted to retire.”

“They withheld money and started saying things, so I sued,” he said of the Jan. 25, 2019 lawsuit filing.

The legal wrangling has been ongoing between Sullivan and the GCRS since Jan. 25, 2019 and a motion to dismiss and counter argument were filed by each party in late September 2019.

Since then, all construction work on the new site has stopped.

Jackson County Attorney Heather Baker said the County had no comment on the litigation.

“We are, and have been aware of the situation,” she said. “It is under investigation with the appropriate authorities, and therefore we have no further comment on the matter.”